Link Between Air Pollution and Obesity, Asthma and Allergic Diseases - A Research Report

September 1, 2021, New Delhi: Millions of school children across India will return to school today, while we have been concerned about their safety with reference to COVID-19 before letting them go back to school, another invisible killer has been impacting their health severely and slowly. Studies across the world prove that Air Pollution is stunting our children's brains, impacting their neurodevelopment and cognitive ability and can trigger asthma, and childhood cancer. Children who have been exposed to high levels of air pollution may be at greater risk for chronic diseases such as cardiovascular disease later in life. One reason why children are particularly vulnerable to the effects of air pollution is that they breathe more rapidly than adults and so absorb more pollutants.

Lung Care Foundation and Pulmocare Research and Education (PURE) Foundation conducted the study across 12 randomly selected schools in Delhi, Kottayam, and Mysuru. The primary aim of the study was to assess the respiratory health of adolescent school children studying in private schools in the city of Delhi and compare them with relatively cleaner cities in terms of particulate matter air pollution, viz: Kottayam and Mysuru. The study was funded by Shakti Sustainable Energy Foundation and got published in a leading a peer-reviewed medical journal, Lung India, on 31st August 2021.

3157 adolescent school children were examined in the study to assess their lung health. All children completed a comprehensive questionnaire, that was based on a standard, validated questionnaire developed by the International Study for Asthma and Allergic Diseases in Children (ISAAC). All children also underwent an on-site spirometry, which is the gold standard test to assess lung function, by certified technicians and nurses.

KEY FINDINGS OF THE STUDY 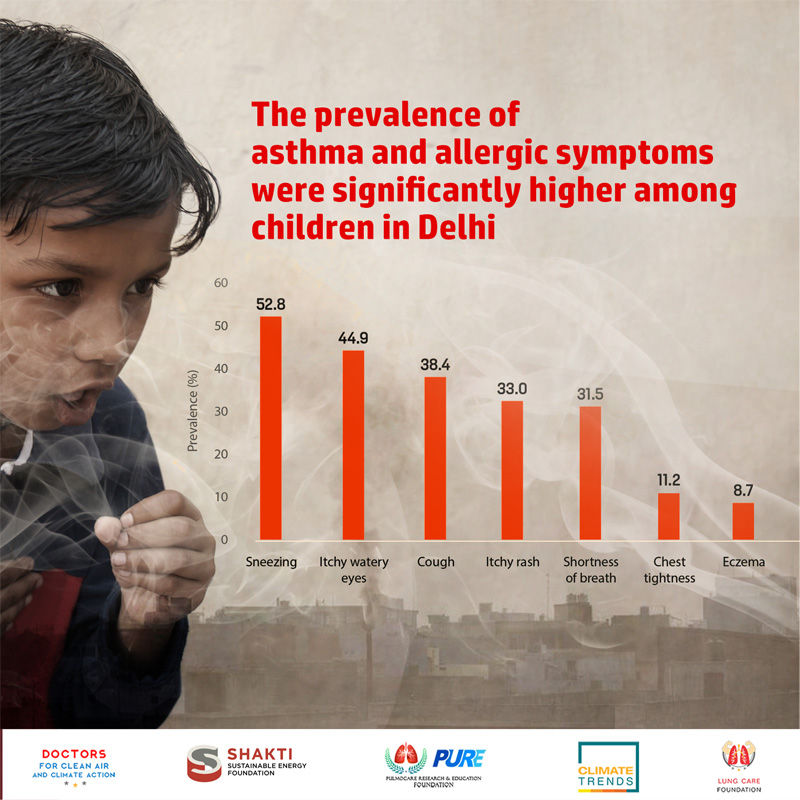 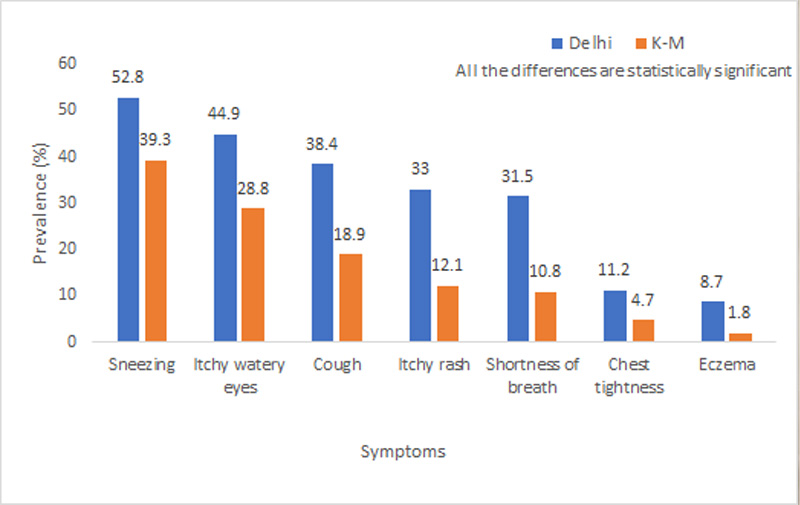 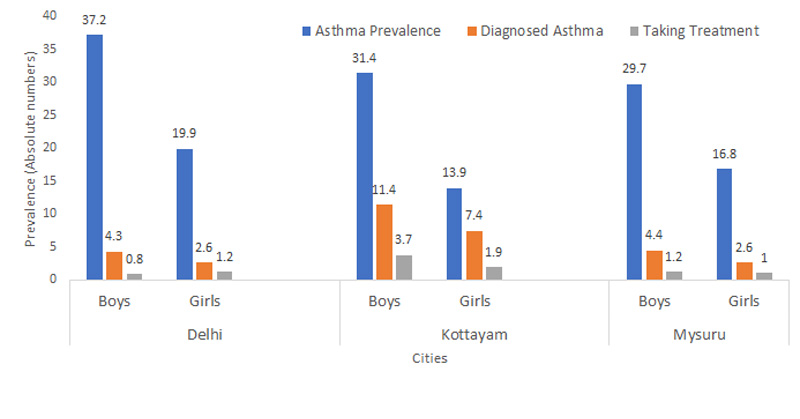 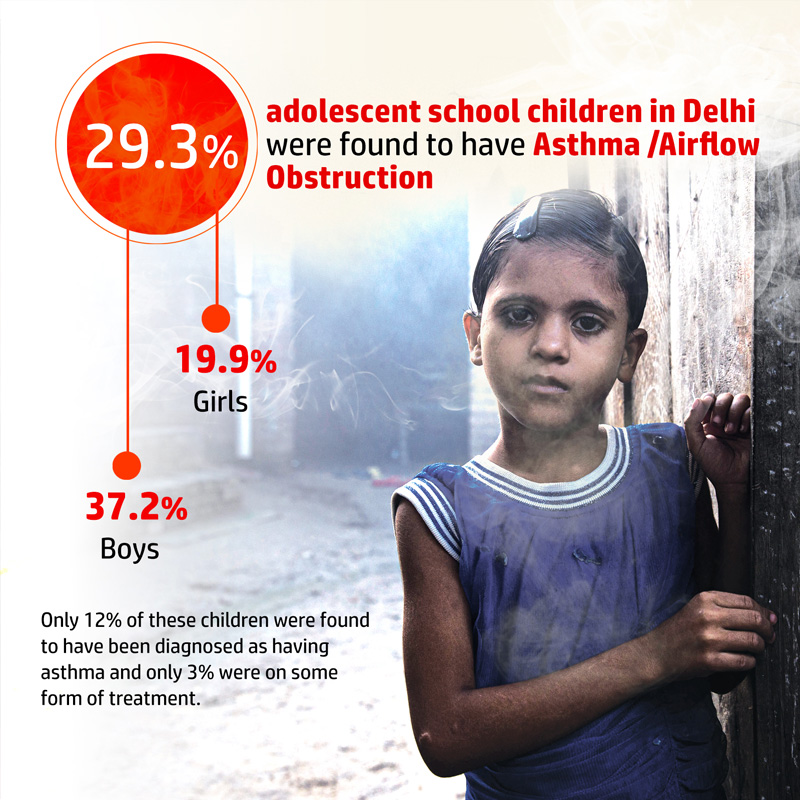 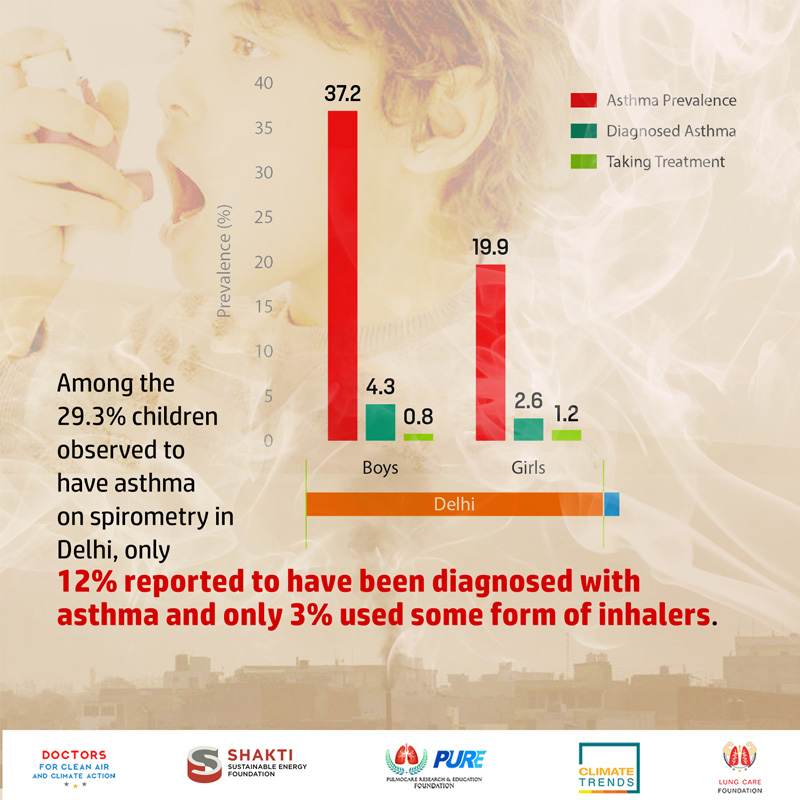 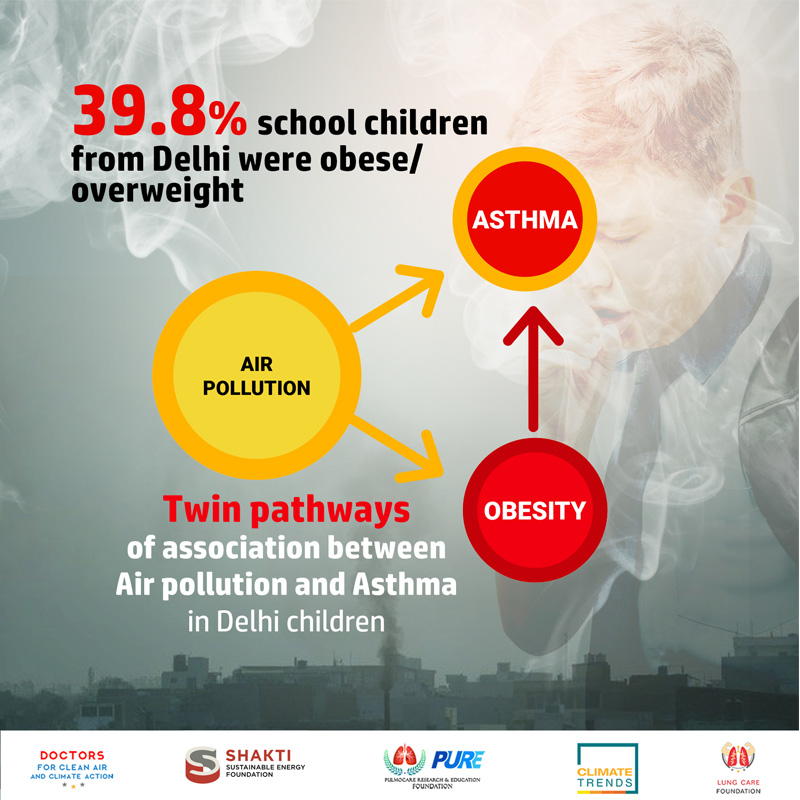 Key Finding 3: Link between obesity & Asthma: High prevalence of Obesity in Delhi children and higher incidence of Asthma in them

Dr. Arvind Kumar, Founder Trustee Lung Care Foundation & Chairman – Institute of Chest Surgery, Medanta, Gurugram said that "This study is an eye-opener. It has shown an unacceptably high prevalence of respiratory and allergic symptoms, spirometry-defined asthma, and obesity in Delhi Children. Air Pollution is the probable link with all three. It is high time that the air pollution issue in Delhi and other cities is settled in a systematic manner to save the future of our children."

Dr Sundeep Salvi, Director, Pulmocare Research and Education (PURE) Foundation, Pune said "This is one of the first studies in India among adolescent school children that has shown a strong association between obesity and asthma, and that air pollution may have a direct link between the two. Breathing polluted air can make children fat and this may increase their risk of developing asthma."

Growing up in extremely toxic levels of air pollution can be extremely harmful for our children. In a landmark ruling in London in December 2020, a judicial official Philip Barlow ruled a 9 year old girl, Ella, the first person in the UK – and likely the world – to have air pollution listed as a cause of death. Ella died of severe Asthma, which was found to be because of high levels of Air Pollution. The life of millions of children in India is at risk.

Bhavreen Kandhari, a mother, said "As a mother of 2, the findings of this study horrify me. I have personally seen my children suffer in health and overall development because of high levels of Air pollution. They had to give up sports they were great at. Our children do not deserve this, they deserve clean air and a healthy environment."

According to Air Quality Life Index, a resident of Delhi-NCR can gain 9.7 years in life expectancy if WHO Guideline is met. There is an urgent need for air pollution control measures by the government.

Dr Anurag Agarwal Director, CSIR – Institute of Genomics and Integrative Biology, New Delhi said "This study has shown that around 85% of adolescent children who were found to have asthma in Delhi, did not know that they had asthma, and less than 3% of them were receiving appropriate treatment. Clearly, we need to create more awareness about asthma among parents and teachers, so that underdiagnosis and undertreatment of asthma can be significantly overcome."

Prof. Parvaiz Koul, Professor and Head, Internal and Pulmonary Medicine, Sher-i- Kashmir Institute of Medical Sciences, Srinagar & Editor, Lung India said "This important epidemiologic study from 2 different geographic regions of the country has demonstrated a higher prevalence of airflow obstruction in children in Delhi accompanied by obesity. Since Delhi is far more polluted than Kottayam, the study sets the stage for further large sample epidemiologic, preferably multicentric, studies to prove the link between pollution, obesity and airflow obstruction. Policy makers need to devise and adopt appropriate strategies on an urgent basis to mitigate the adverse effects of air pollution on the health of Indian people."

The high prevalence of obesity also highlights the urgent need to control obesity by sensitizing parents and children. 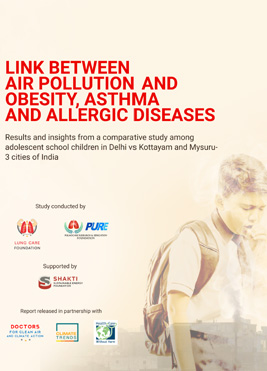 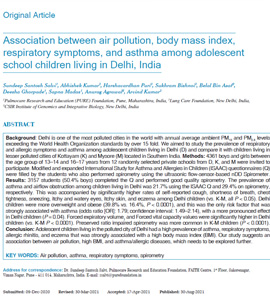